The Fourth Turning: What past generations can teach us about our future

There’s no denying that you and I are part of a significant inflection point in human history. We are living in interesting times. In this video you will see...

Comment by carol ann parisi on July 23, 2022 at 7:40pm
Not surprisingly, many of Blackstone’s best-performing deals—like its 2014 purchase of the Cosmopolitan casino and hotel in Las Vegas and its 2016 deal for life-sciences buildings owner BioMed Realty Trust —were struck during periods of market turmoil.

It won't be just Blackstone that goes bottom fishing in a few months: a slew of private-equity funds are in the market this year, with many trying to raise huge sums even after stocks fell and deal-making dried up. The surge in requests for new cash has overwhelmed investment teams at institutions such as pension funds and endowments and has meant many have delayed making commitments to all but the top managers.

The size of Blackstone’s new fund and the speed at which it was able to raise the money demonstrate that institutional investors are still eager to participate in vehicles being offered by established managers with good records. And while the ranks of $20 billion-plus buyout funds have been growing, there are still relatively few real-estate megafunds comparable with Blackstone’s.

As the WSJ adds, just like the firm as a whole, Blackstone’s $298 billion real-estate business has embraced a thematic investment strategy with the goal of targeting areas of the economy where growth is outpacing inflation. That has led it to focus on four key areas: warehouses used for e-commerce; life-sciences office buildings; rental housing; and hospitality tied to travel and leisure. It has also excelled in all four areas, long ago becoming the largest US residential landlord much to the chagrin of tens of millions of Americans who dutifully pay Steve Schwarzman for the privilege of having a roof over their head.

Comment by carol ann parisi on July 23, 2022 at 7:40pm
... which is predictable: after all, with mortgage rates soaring at the fastest pace on record to decade highs, and sending US housing affordability to the lowest in history...
... only a handful of the "1%" can afford the American Dream.
Alas, it also means that just like in 2007, a housing crash is now just a matter of time.

That much is known. What is also know, is that once housing craters, the largest US residential and commercial landlord - private equity giant Blackstone - is about to get even bigger. That's when it will deploy some (or all) of the record $50 billion in dry powder it has raised to prepare for just the coming housing crash.

According to the WSJ, Blackstone is the final stages of raising a new real-estate fund that would set a record as the biggest vehicle of its kind, defying market volatility and a crowded landscape for fundraising.

The private-equity giant said in a regulatory filing Wednesday it has closed on commitments totaling $24.1 billion for Blackstone Real Estate Partners X, the latest iteration of its main real-estate fund.

According to the WSJ, Blackstone is committing about $300 million of its own capital and has allocated an additional $5.9 billion to investors, which will bring the fund to $30.3 billion when it is finalized. The firm raised the fund, expected to be the largest traditional private-equity vehicle in history, in just three month. It was also Blackstone that set the prior record, with the $26 billion buyout fund it raised in 2019. The new real-estate fund will be 50% larger than its predecessor, a $20.5 billion pool raised in 2019.


Together with funds dedicated to real estate in Asia and Europe, Blackstone will have a war chest of more than $50 billion to do so-called opportunistic investments, which tend to be higher-risk deals with the potential for higher returns.

That, according to the WSJ, "could allow the firm to take advantage of a downturn in the public markets." Translation: at a time when Americans are liquidating their housing en masse to shore up liquidity when the bottom falls out from the economy, Blackstone will step in and buy all the distressed properties at pennies on the dollar, becoming an even bigger presence in US, and global, real estate.

The past two months have seen a barrage of negative news coverage focusing on the US housing market...

... which is predictable: after all, with mortgage rates soaring at the fastest pace on record to decade highs, and sending US housing affordability to the lowest in history... 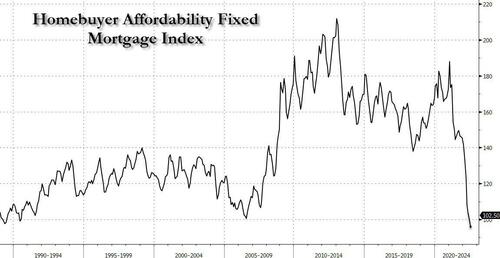 The Great Food Reset is underway…and people are going crazy.

Protesters in Panama have been out in the streets for two weeks straight as the price of food has risen to a point where many can barely afford rice.

The government in the Netherlands has instituted climate policies that will result in farms being destroyed and massive amounts of cattle being culled.

And here in the United States…

Food banks are already seeing a flood of new families.

Not to mention the rapidly rising cost of food and fuel.

Plus, extreme droughts in places like Texas and Oklahoma - which produces over a quarter of the nation’s beef - are leaving cows with less food to eat and ranchers being forced to cull more of their herd to stay afloat.

THEY - the technocrats hoping to force you to eat bugs, give up your property, live in smart cities, and sacrifice your livelihoods (and even your lives) to “save the planet” while THEY ride in jet planes and limos - are very pleased with what’s happening around the world.

THEY believe they can starve you into compliance.

But THEY don’t know who they’re dealing with.

See, the world is not running out of food.

There’s more fertile farmland and ways to grow and raise healthy food than ever.

WE have the power to eat and live in abundance. Because the world and our local communities are full of abundance.

THEY cannot starve us if we don’t let them.

Abundance is our birthright but only if we WORK to maintain it.