Businesses Flee Chicago as It Crumbles Under Lori Lightfoot

Businesses Flee Chicago as It Crumbles Under Lori Lightfoot

Published on June 30, 2022
What’s the worst city in America right now?
LA and San Francisco in Gavin Newsom’s California are both disasters, with homeless people on the sidewalks covered in their own feces while the aquifers run dry, drugs flow freely, and citizens (or are they closer to subjects?) pay sky-high taxes in exchange for receiving…nearly nothing from their government other than nice weather an pretty views, at least when the views aren’t ruined by homeless people defecating on the beaches or sidewalks before enjoying a nice dose of fentanyl. So those aren’t great and the mass lootings have made them even worse.
Then there’s New York, which was nice for a long while after Rudy Giuliani cleaned it up, but is now another leftist hellhole where crime appears to be rampant and costs are shockingly high, but it doesn’t have the same defecation problem as San Fransicko, at least.
But worst of all might be Lori Lightfoot’s Chicago, where violence is so rampant that the city is known by many online as “Chiraq” and shocking tallies of dead and wounded from gunfights over the weekend routinely fill the pages of the Chicago Star-Tribune, Fox News, and Townhall. Though it doesn’t have some of the varied problems of LA, NYC, or San Fran, it has the violent crime problem and that’s taken to a whole new degree.
And so businesses are fleeing it, with Fox News reporting that:
A business owner in Chicago, Illinois tells Fox News Digital that skyrocketing crime in the city forced him to quit doing business in town adding to the list of individuals and businesses that have fled Illinois over the past couple of years amid surging crime.
Gary Rabine, founder of the Rabine Group and owner of 13 businesses, told Fox News Digital this week that surging crime in Chicago was a driving factor in his decision to pull his road paving company out of the city after his crews were repeatedly robbed, sometimes in broad daylight, even after adding security to the jobs.
Speaking on what’s going on in Chicago and why the situation is so bad that he has been forced to leave town, Rabine told Fox News Digital that:
“We would do thousands of jobs a year in the city, but as we got robbed more, my people operating rollers and pavers we got robbed, our equipment would get stolen in broad daylight and there would usually be a gun involved, and it got expensive and it got dangerous.”
Then, describing how the cost of doing business in certain areas was so high that his company had to stop doing business there, Rabine said:
“What happened eventually is we said enough is enough. We stopped doing work down there, we stopped doing work for the gas company, the electric company, the south side, the west side and eventually all over Chicago. Those companies now work in other places. They work over the border in Wisconsin, the outer suburbs of Chicago, where they feel safer.”
And Rabine isn’t the only one. Ken Griffin of Citadel, the (in)famous hedge fund, told the Wall Street Journal:
“If people aren’t safe here, they’re not going to live here. I’ve had multiple colleagues mugged at gunpoint. I’ve had a colleague stabbed on the way to work. Countless issues of burglary. I mean, that’s a really difficult backdrop with which to draw talent to your city from.”
And it’s not just a few, random anecdotes telling the tale of flight from Lori Lightfoot’s hellhole. According to the Illinois Policy Institute, which published in a study in December about flight from Illinois, “more Illinoisans fled for other states from July 2020-July 2021 than during any other year in recorded history.”
Red states like Florida, the state to which Citadel fled, on the other hand, are doing great. 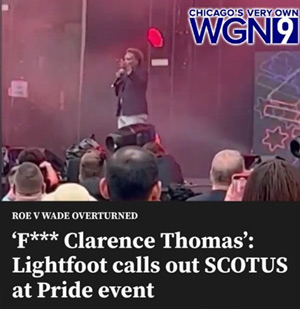