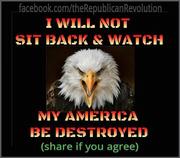 Export to Outlook or iCal (.ics)

WE BROUGHT YOU CURTIS BOWERS THE PRODUCER OF THE MOVIE AGENDA AND NOW.....

Is prominently featured in the award winning documentary "The Agenda" by Curtis Bowers.

Mr Louden will be signing bookss and books will be available for purchase as well as the movie AGENDA!
DONT MISS THIS SPECIAL EVENT!!!  Wednesday, August 15, 2012 Confirm 7 PM to 8 PM Chicago, IL Speak Chicago Tea Party